New Paper on Pine Point by LeClerc and Wiersma

If you have thumbed through Mining and Communities in Northern Canada, you know that the effects of mine abandonment continue to ripple through communities long after closure. This prolonged ripple effect is also true of abandoned mines’ environmental impacts, especially in northern ecosystems. My second co-authored paper about Pine Point has just been released, and its focus is the mine’s environmental legacy (read the full text online here). In this paper, Dr. Yolanda Wiersma and I investigated whether industrial resource development and abandonment have long-term effects on subarctic, boreal environments using the Pine Point mine as a case study. 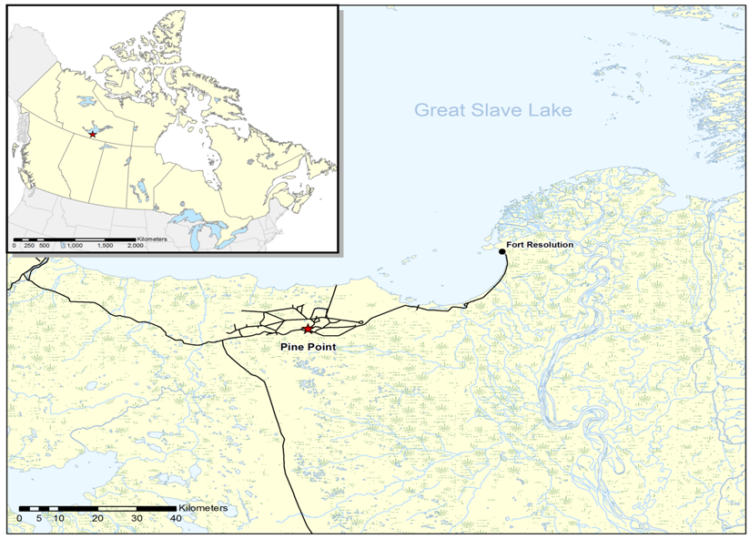 The Pine Point mine (1964-1988) was an open pit lead-zinc mine that shut down when ore prices dropped below a profitable level. At Pine Point, the reclamation strategy involved covering the massive tailings pond with waste rock and building barricades to block access to the site. The pilot study for revegetating the tailings pond was unsuccessful, and no further attempts at revegetation were made. The Pine Point mine was thus abandoned, leaving behind a post-industrial landscape approximately 1900 square kilometers in area, comprised of 46 open pits, the 570 hectare tailings pond, piles of waste rock, and extensive networks of haul roads and cutlines. While this plan for closure and abandonment was deemed adequate by governing bodies at the time, it would be considered unsatisfactory by today’s reclamation standards. Local land users from Fort Resolution have repeatedly voiced concerns about the environmental state of the abandoned mine. 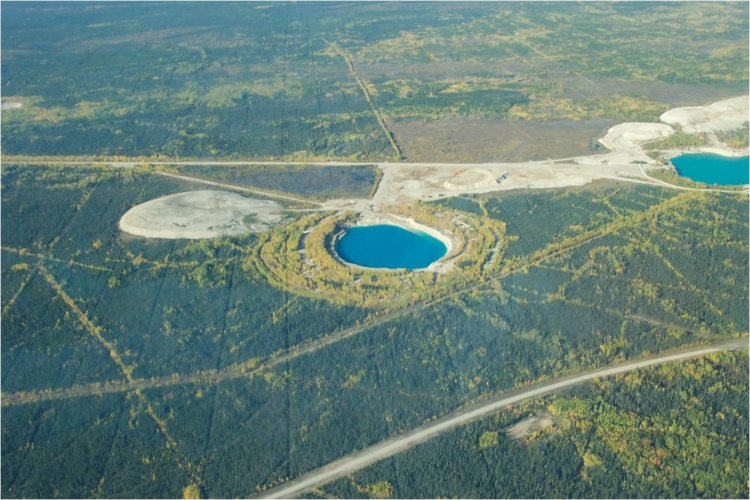 Given the passive approach to reclamation undertaken at Pine Point and the ongoing environmental concerns, we set out to discover whether land cover at the site has changed since its closure more than two decades ago. Landscapes are dynamic; patterns are continuously being shaped and reshaped by different ecological processes, and vice versa. By analyzing changes in land cover at Pine Point through time, we hoped to evaluate the long-term effects of industrial resource development and abandonment on landscape patterns in a boreal context.

In our paper, we used four satellite images spanning the twenty years after closure to see how landscape patterns at Pine Point have changed since closure. We classified the images into six different land cover types and calculated a series of landscape metrics to quantify landscape patterns. We performed the same analysis at a nearby site in Wood Buffalo National Park, which served as an analogy for how the Pine Point landscape might have developed in the absence of industrial development. We expected the Pine Point site to become more like the Wood Buffalo National Park site over time as a result of natural revegetation.

So what did we find? The landscape metrics showed that the Pine Point site remained quite different from the Wood Buffalo National Park site, even twenty years after closure. In terms of land cover composition, the site in the park is dominated by dense coniferous forest, whereas the Pine Point site is dominated to varying degrees by open coniferous forest and regenerating vegetation. While the metrics indicated that unvegetated land at the Pine Point site is becoming more fragmented – which could correspond to natural revegetation around the edges of mine features – the resolution of the satellite imagery wasn’t fine enough to draw definite conclusions. In addition, the overall amount of unvegetated land at the mine site remained pretty stable compared to the park site; this stability means the natural revegetation occurring at Pine Point is happening very slowly. The long-term monitoring of abandoned mines in northern Canada requires better access to affordable, high-resolution imagery that can capture the fine-scale land cover changes that reflect ecological processes of vegetation conversion.

Our findings have implications for how we think about mine closure and the problem of monitoring abandoned mines in general. This paper shows that the passive reclamation strategy at Pine Point has done little to effect vegetation conversion at the site. Certainly, this is not news to land users in nearby Fort Resolution, who have repeatedly attested to the environmental degradation of Pine Point. While the comparative stability of the Pine Point site in what should be a dynamic boreal environment may not be a shocking revelation, it should make us reconsider passive reclamation as a viable closure strategy in northern Canada. The abandoned mines that dot Canada’s North pose myriad challenges, ranging from legal to socioeconomic to environmental. Our paper shows that the environmental challenges are not going to fix themselves.