I travelled to Yellowknife (with a heavy box of maps!) in May with the intention of 1) mapping the changes in traditional land use activities around Wiìliìcheh (Yellowknife Bay), and 2) understanding how mining contamination is perceived and experienced by the Yellowknives Dene First Nation (YKDFN).

Upon my arrival, I was immediately greeted by YKDFN’s traditional knowledge specialist, Mr. Randy Freeman and former Chief of Ndilo, Fred Sangris. Little did I know that Randy and Fred would become my ‘right hand men’ during the course of my fieldwork. From taking me out on the boat to check fish nets, and teaching me how to tell the difference between a healthy and unhealthy fish liver, to showing me traditional travel routes, my experience would have been completely different without them! 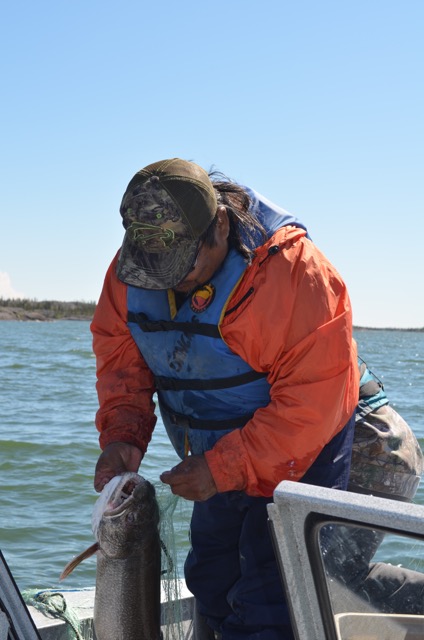 During my interviews, I asked land users to identify on two maps where they go hunting, fishing, collect drinking water, and gather berries and medicinal plants. Most importantly, I asked if there were any sites that they tended to avoid for certain land use activities, and if so, why? It became clear that mining contamination, along with restricted hunting zones, increasing recreationalists and municipal waste were major influences in changing traditional land use patterns. Elders explained to me that prior to mining activities, the Yellowknives Dene used to fish along the flanks of Wiìliìcheh and hunt in Wag’we (where the town of Yellowknife currently sits). Today, land users avoid this area out of fear and uncertainty of arsenic contamination. When participants were asked to indicate where they feel safe to drink water and catch fish for consumption, they drew an invisible boundary line south of Wiìliìcheh. What is interesting is that this invisible ‘safe zone’ seems to be based on the knowledge and experience of the land user (there are no public health advisories in effect). Many land users explained to me that fish caught in Wiìliìcheh had sores or deformities, and even at times tasted oily. Further, when talking about firewood in the vicinity of the Giant Mine, one participant described,

‘If you never seen a green flame before, cut some trees around Giant Mine and burn them you are gonna see green blue flames. It’s unnatural. It might be uh sulfur dioxide, it might be arsenic, it’s contamination, it’s pollution from the mines.’ 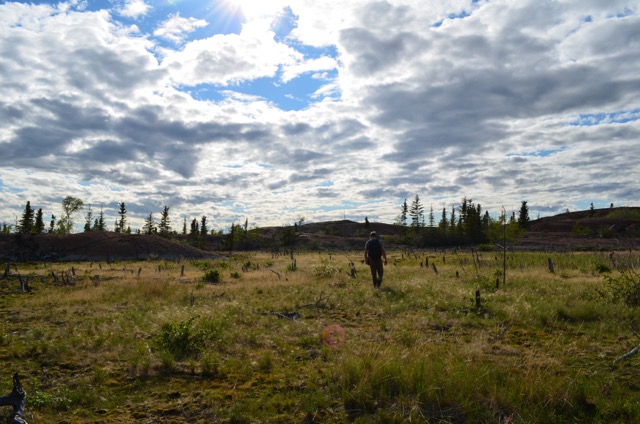 ‘Visiting’ the Giant Mine Site

In addition, danger signs such as ‘KEEP OUT CONTAMINATED AREA,’ ‘ASBESTOS: Cancer and Lung Disease Hazard’ and ‘KEEP OUT OPEN PIT’ now bombard and encircle the Giant Mine site. Imagine driving by this site every day knowing less than 100 years ago it was a blanket of blueberries? If there is one thing that’s for sure it’s this: that the scarred landscape around Yellowknife Bay serves as a constant reminder of past environmental injustices. From blue flames, to fish deformities, and fenced off areas, the Yellowknives Dene were forced off of their lands, and with this project I will show where exactly these changes took place.