Svalbard, an archipelago in the Norwegian High Arctic, like many sites in the Canadian High Arctic, is a place you would typically not expect to find mining activity. But like the Canadian Arctic, not only do you find mines on Svalbard, but evidence of historical mining and the abandoned communities left behind.

Geographers have long been interested in studies of place and landscape. Many visitors to Svalbard similarly become intrigued with the geographies of its landscape. Arriving expecting to experience and consume pristine Arctic nature on Svalbard, visitors are often puzzled by the industrial landscape that dominates Svalbard’s main settlements. In Longyearbyen, the landscape is dominated by an iconic coal powerplant smokestack that constantly churns out dark smoke. The mountainsides are scarred by the remains of mining infrastructure. In Pyramiden, high modernist Soviet housing and austere administration blocks form the basis of this abandoned Russian mining town. Not only does the scale of human activity come as a surprise to visitors on Svalbard, but also, the industrial character of this activity forms a stark contradistinction to the imagined purity of the Arctic.

As geographer and visitor, as reader of the landscape, as interpreter of texts and as a researcher posing questions to people on Svalbard, it was my aim to decode the geographies of mining on Svalbard. This summer I spent one month on Svalbard conducting research to better understand the reasons for the development of mineral exploitation on this remote archipelago, to consider the economic, geopolitical and environmental implications of this development, and to speculate on the future of mining on Svalbard. 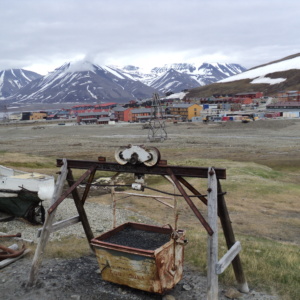 Abandoned mining infrastructures have become part of the fabric of Longyearbyen, the administrative centre of Svalbard. 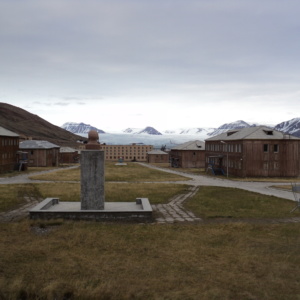 Pyramiden, an abandoned Russian mining settlement on Svalbard. A Lenin bust in the foreground overlooks the centre of the town and Nordenskiold glacier.

Over the coming months, I’ll use my research material to answer these research questions – so stay posted!