“Project Dystopia,” “The Information Tomb” and the “Giant Facility for Environmental Hazards” were among the conceptual models developed for markers and warning systems at Yellowknife’s Giant Mine by a class of cultural geography students at Memorial University. The abandoned Giant Mine in Canada’s Northwest Territories is the location of 237,000 tonnes of arsenic trioxide buried in underground chambers, which the federal government has proposed to control by freezing in place for at least 100 years. Memorial University’s Toxic Legacies project is exploring community concerns around this remediation plan, including the question of how to communicate this hazard to future generations.

Students in Arn Keeling’s third-year Cultural Landscapes class grappled with this problem by creating scale models for their design concepts of commemoration and warning systems. During a class workshop, they used everyday objects like blocks, figurines, cardboard and carpet swatches to imagine how to mold the landscape above Giant Mine to both warn future generations of the hazards underground and to inform them about how to care for the site. They drew on the Memorial research team’s report on Communicating with Future Generations, landscape theory, and other sources to think about the role of landscape markers in a “multi-level” messaging system to warn the future about toxic contaminants at the mine.

The very creative results ranged from minimal markings above ground (so as to avoid attracting the curious), to complex and fanciful symbolic systems intended to deter humans from entering and disturbing the underground arsenic chambers. Many conceptual designs addressed the thorny question of language change by using symbols, monuments, and even colour to communicate danger. Others created mathematical or cartographic symbols to indicate the hazards at the site, or instructions on how to ensure the continued freezing of the underground chambers. Education was a feature of several projects, for groups who advocated the importance of teaching the future about the problems at the mine. Check out some images of the results below.

All the project teams suggested that memorial and commemorative landscapes do have an important role in communicating hazards to future generations. However, as one group noted, “it is important to re-evaluate memorialized hazards to determine the most effective methods of literal and figurative communication as possible. Through this constant innovation and collaboration, society today will hopefully be able to warn people about the hazards that we discover, and those that we create.” Certainly, the models created by the students provide considerable food for thought on the many challenges of how to commemorate the toxic legacy of Giant Mine while warning the future of its dangers. 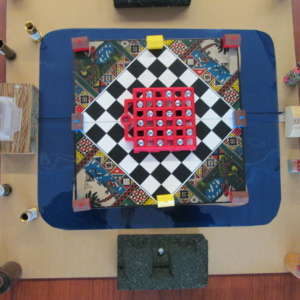 This diorama features a two-level messaging system while also acting as a figurative map. 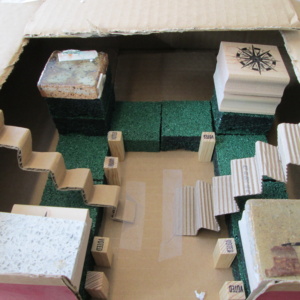 “The Information Tomb”: an underground system of information and warnings. 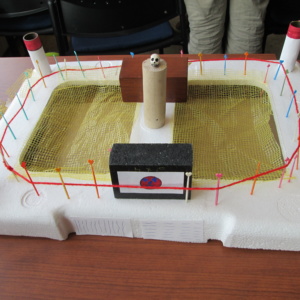 This team felt it was important to secure the perimeter of the site. 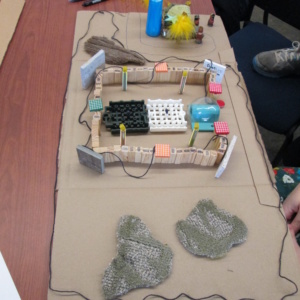 This concept included both an educational function and the securing of the mine site. 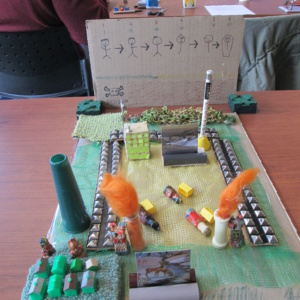 “Project Dystopia” created a symbolic landscape of life and death to communicate hazards.

Thanks to John Sandlos of the Toxic Legacies project, and to Max Liboiron for her advice and her magic box of building stuff.